To Lift a Star

Video submitted by Gonzalo: To Lift a Star

To read the entire story and see the photos click HERE.

Some people really want to get to the Nationals!

Gonzalo (old man) Diaz and his saintly wife Carmita hitched up three snipes to his 14 year old van to make the trip from Miami to San Diego for the nationals. Other than a flat tire “it cost me $27.00 to fix!” the trip was uneventful.  All this at the nice young age of 80 something. 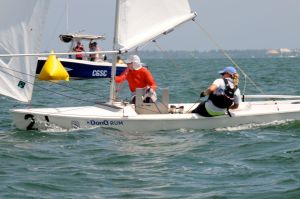 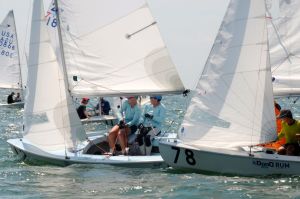 On Friday the sea breeze didn’t start to fill in until noon, so there was plenty of time for more bagels and coffee. Winds varied between 7-10 knots, mostly from the southeast. Finishing first in the first race was Luis Soubie and Diego Lipszyc of Argentina, followed by Raul Rios of Puerto Rico and local Andre Guaragna, and third saw locals Augie Diaz and Kathleen Tocke. Raul and Andre took over first place the next race, with Augie and Kathleen still right behind. Louis and Diego slipped back to eighth while locals Peter Commette and Jensen McTighe picked up the third.

Saturday began much the same way, and the sea breeze picked up to 7 knots around 1pm, quickly building up to a steady 11 for the rest of the afternoon while it clocked right from the southeast. Locals Nick Voss and Nicole Popp finished first in race three, while Augie and Kathleen mixed it up, finishing in second just ahead of Raul and Andre who took third. Determined to keep their lead, the fourth race was led much of the way by Raul and Andre who put a sizable gap between their boat and second place, locals Ernesto Rodriguez and Eduardo Mintzias, who were followed closely by Augie and Kathleen in third.

After racing the second day, sailors were greeted at the dock with Don Q daiquiris that, after a brief supply shortage scare, continued to flow freely throughout the delicious Cuban dinner buffet at the club.

The breeze kicked in Sunday morning around 10:30, which worked out perfectly with the usual earlier start time. One race was completed in a steady 9 knot breeze that shifted left from the southwest. Raul and Augie, who had been duking it out the first four races, slipped back to ninth and tenth respectively this race, while Louis and Diego reclaimed the first spot. Closely behind were north-easterners Andrew Pimental and Nikki Bruno. Nick and Nicole came back as well for a final finish in third.

Awards were given to the top ten placing teams, representing Puerto Rico, USA, Argentina, Brazil and Ecuador. Raul and Andre took the overall win and perpetual trophy with a total of 16 points. Augie and Kathleen won second overall with 20 points and in third were Louis and Diego with 30 points.

The Snipe class would like to thank our hosts, Coconut Grove Sailing Club, the race committee who kept us in line, and all those who helped feed us and run the show.  Thanks to Cathy & Marc Buller for providing their Otra Cuba Libre as Signal Boat.  Signal Boat crew included PRO Ron Rostorfer (PC), Snipe Class Representative Brainard Cooper, Timer Dottie Rostorfer, Flag and Sound Signalers Veronic Aghayan, Steve Schwartz and Paco Calvet, and recorders Connie Bradley, Suzanne Roberts and Saralee Lamb. 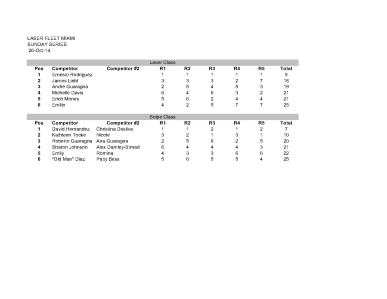 Report: The Florida State Junior Championship started in 1957 with Ken Lippincott winning it at Coconut Grove Sailing Club.  He won again at Eau Gallie in 1958.  Among the Early winners we can see:

1959 Charles Morris,1960 Bruce Cochran, 1961 Dan Brown, 1964 Fred Bremen, Jr.,  1965 Tom Bremen, 1967 David Albury, 1968 Augie Diaz. to mention some. This Championship was moved around Florida, but right after 1968 the Miami Yacht Club took over holding this regatta and a year later Coconut Grove Sailing Club took over and from then on to today our Club together with the Miami Snipe Fleet have been sponsoring the Florida State Snipe Junior Championship.

Jensen McTighe with crew Dae Kelly won the Championship this year.  Jensen and Dae sailed the first 4 races on Saturday without a pole (broke the pole before the first race)  I wished we had filmed some of the downwind finishes with Jensen without a pole trying to hold second place from passing him and he was very successful!! (see the results). On Saturday the RC set windward leeward courses with winds 10 mph clocking from approximately 125 degrees and on.  Similar conditions on Sunday but with a little more wind.  The Race Committee was able to complete the scheduled 6 races with one throw out.

The Coconut Grove Sailing Club Race Committee did a wonderful job with Susan Walcutt as the PRO and first class help from Jaime Ramon, Andi Hoffman, Veronic Aghayan, Denise Schneider, Carol Temple, Jim Waldron, Sandrine Quenne, Paul Sarvich, Jose Torres, Larry Whipple, Bill Godfrey and special thanks to Clint and Terry Boram that commanded and donated the use of their boat “Sea Jewel” as the Signal Boat for this Regatta. Also special thanks to Pere Puig for helping in preparing and fixing some of the Junior boats.

After the races, the juniors and the Race Committee enjoyed a hamburger cookout followed by Susan Walcutt presenting the trophies to the first 3 winners. 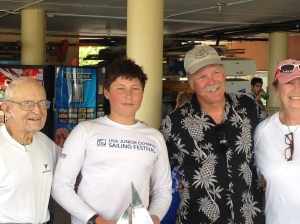 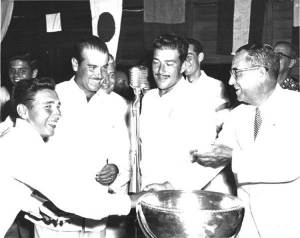 Trophy presentation. From the flags hanging behind them I gather it could be the 1951 Worlds or 52 Western Hemisphere. Looks like Mantilla and Barrazal are receiving trophies. 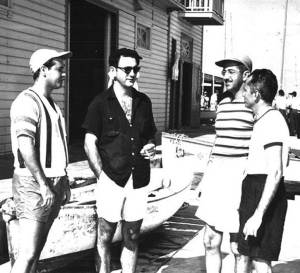 Left to right: Mantilla, Carlos Sela (el Cheque) (That is why Fred Schenck named his Snipe # 10101 “Chequendeque”), Clemente (Mente) Inclan (my hero) and Carlitos Inclan, his crew. They are in front of the old wood “boat house”. You can see snipe activity in the back where we used to have the wood snipe stables before they built the new ones.

Jorge Mantilla and Jesus Barrazal approaching the hoist after a race. 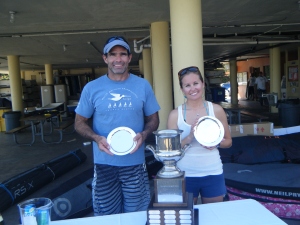 the winners, Ernesto Rodriguez and Hillary Noble with the Comodoro Rasco Perpetual Trophy 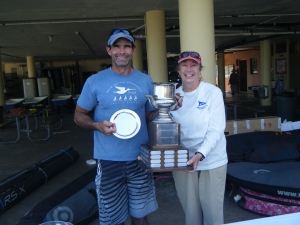 Ernesto Rodriguez/Hillary Noble tied with Peter Commette/Bruno Mello, but the tie breaker gave Ernesto and Hillary the Championship!  It was a real battle between these two with Kevin and Ashley Reali getting in there, participating in the tough competition and finishing in third place.  The AICARDI TROPHY was awarded this time to the most accomplished skipper, the young  Andre Guaragna with his father crewing for him. The greatest accomplishment is surviving his father, Andre is the coolest guy I have ever seen!! Keep and eye on Andre he will be a top Snipe sailor!

Saturday we sailed three races in typical beautiful Biscayne Bay weather with NE and East winds 10 to 15.  Temperatures around 75 Fahrenheit   On Sunday two races sailed in West and then NW winds around 10 miles turning into very light for the last race.

Saturday evening, after the races, the Fleet and the Race Committee headed for the Lasagna Dinner/Party at Carmen’s.  Nobody was disappointed after such a beautiful sailing day, the traditional Rasco Party, Carmen’s homemade Lasagna, salad, wine, Cuban deserts, sailing videotapes and the Rasco history presentation by the Old Man.  It was a perfect day for the Snipe Sailors and the Race Committee.

Sunday we were back to the Club after the two races at around 2 PM.  Susan Walcutt proceeded to award trophies to the first 3 places (skipper and crew) and to the Aicardi winner.  Right after the award, we all sang the famous “LA BOMBA” to Ernesto Rodriguez, Peter Commette and Bruno Mello.  Peter was the one that really took care of LA BOMBA, and DRANK IT ALL!